The New York Mets players and their Central New York fans got along well Tuesday afternoon in the Carrier Dome.

A crowd I thought to be somewhat comparable to a Syracuse University spring football game watched the players get ready for Thursday’s season-opener in D.C. against the Washington Nationals with plenty of enthusiasm. (On the way home, I heard Syracuse play-by-play announcer Matt Park estimate the number at 4,000 to 5,000 on his Orange Nation radio show.)

The players seemed to make the most of the two hours spent away from home, too.

Really, with the limitations of fitting into a football field, the actual playing couldn’t amount to much.

Brandon Nimmo takes his cuts in the portable batting cage.

Two batting cages were set up so the position players could swing. 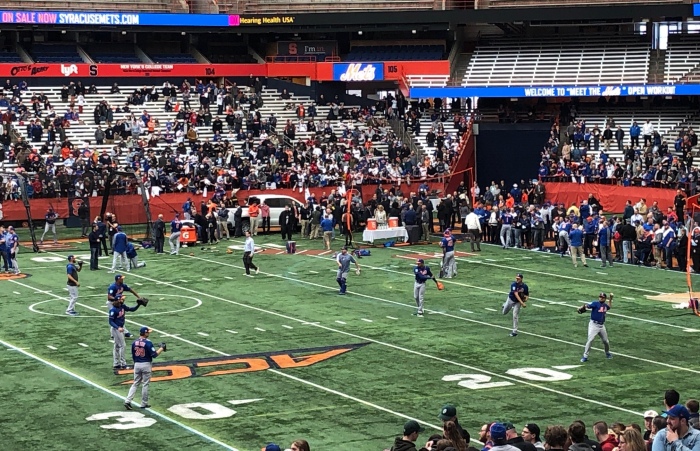 The Mets played catch with each other.

But they seemed to have more fun looking distant fans in the eye, pointing, and sending baseballs way up high toward the intended target, a couple hundred feet away. Some of the fans caught the ball in the stand bare handed. Some balls bounced off and the around the bleachers. Youch!

After his honest interview about wishing that the Mets did not have this trip to Syracuse on their agenda, pitcher Noah Syndergaard appeared to make amends by grabbing the Syracuse University cheer squad’s “S” flag, taller even than him, and walking and waving it around the field.

The players gathered as a group as New York Mets general manager Brodie Van Wagenen took the microphone and closed the festivities with a heartfelt thank you for the support and promise that the organization’s link to the Syracuse Mets would be good for all involved.

Mascots Mr. Met and Scootch shared the moment with fans as the event ran down and manager Mickey Callaway ran off.

Outfielder Juan Lagares and many of his teammates threw their hats to fans in the stands before disappearing into the tunnel for last preparations for Thursday’s game against the Nationals.

The Syracuse Mets open the following Thursday, at home against the Pawtucket Red Sox.