Women’s Lib was just getting started its feet on the ground in London when the Miss World beauty pageant came knocking on its theater doors with Bob Hope as the MC and an international TV audience on his coattails.

The women who would walk on stage to show off their talents and more in 1970 earn the wrath of a small but determined group of women protesters is <em>Misbehaviour</em>, a taken-from-the-headlines mix of drama and comedy directed by Philippe Lowthorpe from a screenplay by Rebecca Frayn and Gabby Chiappe.

It takes on a feel decidedly British and right for that time period, too, led by solid work by Keira Knightley as studious mom Sally fighting to earn her spot as among the men as a university student and Gugu Mbatha-Raw as Miss Grenada, an underdog in the competition who has as much grit and determination as she does charm and beauty.

Jessie Buckley is just right to churn the roiling waters of the protesters as wild-eyed Jo, and Greg Kinnear carries more than enough smarm as Hope, a legend who sees himself wronged when his turn in the spotlight (didn’t he ever get enough) gets halted by the protest.

Indeed, Sally and Jo explain when hauled off to jail after the donnybrook in the theater, it was Hope’s callous comments that caused them to go off more quickly (and more dangerously?) than first planned. 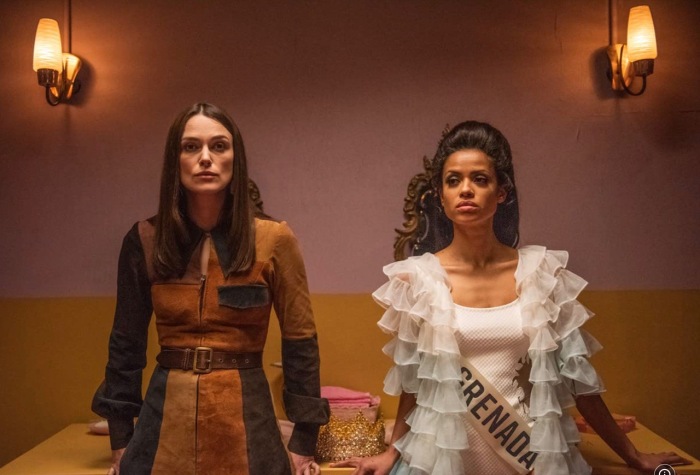 When push came to shove, the women in the pageant and protestors did not look at that event in the same light. Not entirely.

Of course, these five decades later and with self-reflection about differences a must, I watched <em>Misbehaviour</em> on my library streaming resource Hoopla digital and thought about that beginning of women’s liberation and the state of the world now. The chasm in many, many ways is still wide, but the battle is being fought with eyes more wide open. Minds, too, hopefully.