Technically I was right.

When I showed up for the Thursday Night Men’s League at Bowling Green in North Syracuse on Sunday Morning — and yes, you read that right — our squad was listed second on the standings sheet.

Much to my surprise, though, we had the same record as the team listed above us. After winning just one of three games and losing total pins Thursday night, I had posted here before I left for our makeup session that I was sure we’d fallen from the top spot after just one thrilling week at No. 1.

And because league rules call for total pinfall as the determining factor when win points are tied, indeed, we started Sunday behind The Lite Crew.

I was wrong on another count, though.

If not for a split that I almost converted in the 10th frame in game two, I would have been clean.

And I did go through the last game without an open frame to notch a 213. That’s my second set in a row with a 200 game. Nice. With the 533 series, I should be up to a 163 average, nudging past my final mark at the end of last season. 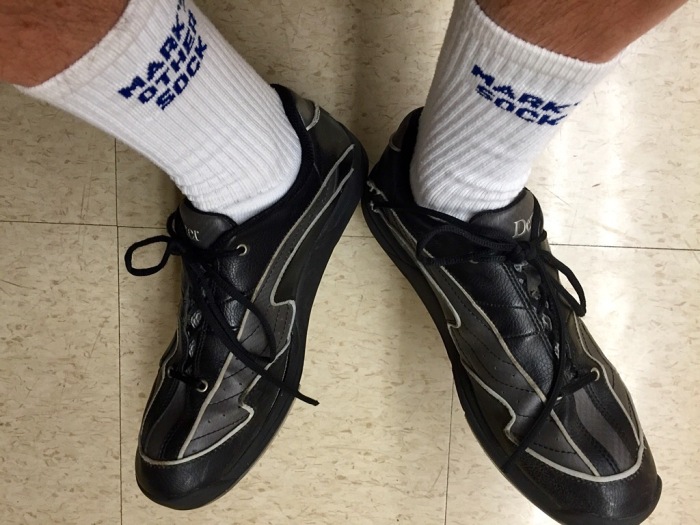 I know they’re mine.

Maybe it was because I chose to wear the special socks my dear wife Karen bought me on our July trip to Colorado for her family reunion, and knew which foot to put in front of the other.

Unfortunately for the squad, that stellar third game was the only one we won. It’s a close battle in the 12-team league. Tonight I think we’ll find ourselves down several slots.

Is 10 a.m. too early to bowl or just right? Did my socks have anything to do with my good last game? What do you predict my average will be at the end of this season?

48 thoughts on “Sock it to me one more time”