Back in the late 1970s, our two bedroom, one-bath apartment in Adelphi, Md., was always rocking.

Yes, Twenty, Aggo and I were eyebrows deep into two years of hard university time within those walls in the cockroach-inhabitated complex we used to lovingly call Residential Plaza, dropping their officious P from the first name because that it surely wasn’t.

Studying, though, was reserved for the libraries and lounges and classrooms a couple miles up the busy suburban roads to the College Park campus. That’s where we spent our days and a good portion of the early evenings, too, attending courses to get our bachelor’s in journalism after transferring down from the tiny upstate State University of New York at Morrisville two-year college to the humungous University of Maryland. After the classes ended, we’d work at the daily campus newspaper, the Diamondback, covering sports teams and editing stories and laying out the section.

Aggo puts on an album in Adelphi, Md.

But once home, to these smallish rooms with the bugs who scattered under the kitchen appliances once you flipped the light on, we were overjoyed. At Morrisville we’d all lived in dorm rooms way smaller, eaten meals from trays in the dining halls, showered, brushed our teeth and accomplished all that business en masse in dormitory wings big enough for dozens. This was the life. Even after Twenty’s older brother Rick — Termite to keep the nicknames going — moved down from New York, too, got a job and made us four.

We played the stereo, always, as loud as we dared without drawing knocks from the neighbors. It was mine, and the brand was Technics. The speakers were from a company named Becker. At Morrisville, when the weather turned warm for two or three days in May, I’d stack both in the lone room window, and crank my music out across the quad, and the Beckers boomed it far from my Stewart Hall and past Twenty’s West and to the girls’ Helyar, where I wanted them to be heard the most.

In the Maryland apartment, Aggo and I favored Steely Dan and Bruce Springsteen, as well as a band we’d partied to live in the Long Island bars, The Good Rats. Twenty and Term went big for the New Riders of the Purple Sage and Mountain. We’d all wail along air-band style for all of them, and way more, Led Zeppelin, the Beatles, Billy Joel … 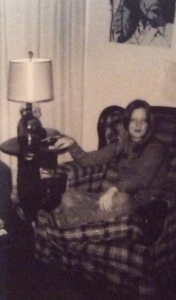 Visitor Zanne gets an important position.

And this was a prime time for Southern Rock, so we really got into the guitar work of the Outlaws. “Green Grass and High Tides” was a blistering favorite, because we’d seen them play live in Hamilton Hall the year before in Morrisville. “This Old Cowboy” and “Twenty-Four Hours at a Time” from the Marshall Tucker Band had our hearts. We were destined to see them come spring at Merriweather Post Pavillion just north apiece.

Then one night we decided if the four of us were going to be a band, we’d call play Southern Rock, bowing to Huey Thomasson of the Outlaws and Doug Gray of Tucker and CDB’s Charlie Daniels his own self. Hell, we’d call ourselves Cattle Crossing.

I’d gotten a camera for Christmas, and it was loaded with black-and-white film. 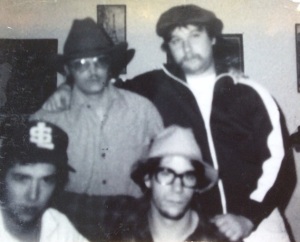 I handed it to our friend Suzanne — Zanne, to us then — and told her that she had the honor of taking the photo for the Catttle Crossing album cover. Staff photographer!

I decided I was the drummer. I played nothing. In fact, none of us played a lick of a thing. But my father was a drummer in a polka band on Long Island, a weekend warrior for wedding receptions and other big parties. I’d loaded his kit in and out of the family car since I was old enough to lift the bass drum. Besides, I was very percussive. I had dibs on the drums. I thought I had the drummer’s look down cold. Nobody ever argued that point after the picture came back.

I carried this photo in my wallet for three decades.

I’d like to thank my friend Marissa Bergen and her blog Glorious Results of a Misspent Youth. The Rock and Roll Supermom inspired this post with her poem Stupid of the Shrapnel Elevatorh.

What was your favorite style of music and band when you were young? Did you ever pose for a fake album cover? If you were to start an imaginary band, what would you name it, and why?