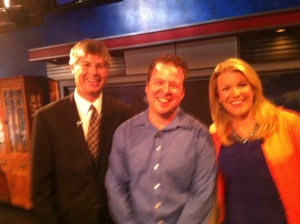 Live TV is a different animal.

I’m no stranger to these question-and-answer sessions. I’ve strained my ear to hear people’s golden words, inside and outside. I’ve hooked the Garth Brooks-like headgear up to my phone to best capture the thoughts and speech patterns of people of many walks of life. I’ve even sat in front of a video camera with a panel of musicians to help them translate the thoughts behind their music notes into words.

For more than 30 years, I’ve asked the questions.

Now veteran basketball writer Mike Waters and I have been on the other side of the equation. We’ve been called by other question-askers to talk about our new book published by Reedy Press of St. Louis, “The Syracuse Fan’s Survival Guide to the ACC.” (Also available on Amazon and at Central New York Barnes & Noble stores.)

Solo, I chatted with reporter Brad Bierman of TheJuiceOnline, and I believe I did fine once he told me he’d turned on his digital recorder.

Together, Waters and I spent about 20 minutes talking with Chris McManus and Steve Infante on the Syracuse ESPN radio affiliate. It was a lively conversation. Fun.

Yesterday morning, Waters and I sat under the bright lights in the studio of WSYR-9 for a segment on the Syracuse TV station’s popular weekday morning ““Bridge Street.”

Mike and I shared the answering.

The thought of a possible couple-second delay did not enter my mind, I swear. What entered my mind was: Do not stumble. Do not mumble. DO NOT SLIP AND SWEAR.

Waters and I were hooked up with wireless mikes, transmit boxes neatly packed into our blazer pockets. We were under the very bright lights. We were on the monitors.

We were available on flat screens all over Central New York.

I DVRed the show. Our segment was not touched by the ABC News news report on the Supreme Court that we saw breaking into the program while sitting in the green room with the pleasant woman and dog from Helping Hounds, film writer of “Copperhead” and representatives for senior safety.

I didn’t quite know what to expect when I hit play at home.

Waters and I looked pretty sharp. We sounded good. I thought I looked particularly squinty. But I didn’t hate it. That’s a good thing.

And we get to to it again Friday morning, requested to get to the James Street studio of CNY Central by 6 a.m. to appear on the CNY Central news show on WSTM-3.