Yes, that is a squirrel doing what you think it might be doing. Oh, nuts, I thought after I ripped open my Christmas card from Bill, the wonderful creator over at Evil Squirrel’s Nest.

Earlier this month, ESN declared on his blog that he had 20 pieces of his hand-drawn artwork featuring his recurring furry characters to send along with holiday cards to the first 20 who claimed them.

I was a tad too slow.

I was No. 21, ESN informed me when he got my email with my address. But in the spirit of the holiday — and his yearlong series that described his contestantship on the infamous ABC game show “Who Wants to Be a Millionaire,” he dubbed me the “First Loser” and told me he’d draw me a special card and send it my way.

Because I had so tickled him with a comment I’d made about a particular between-segment activity that might occupy host Regis for longer than expected, I had an inkling of what my custom-inked card might entail.

Here’s the link for all of Evil Squirrel’s 20 characters sent around the country — now 21 with my First Loser special — to find their way back home.

Thank you so much, Bill. It’s a winner, unlike some of the contestants on said episode … 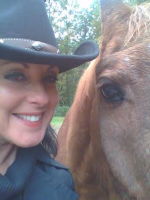