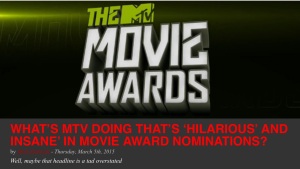 The MTV Movie Awards are on the horizon. Coming up April 12, in fact, and the cable network that used to play music videos is determined to be different.

And of course that’s good. We don’t need another replay of the Golden Globes or the People’s Choice of the Oscars.

In today’s installment of my weekly Film News blog on the Syracuse New Times site, I found a piece on Cinema Blend that looks into the nominations for the MTV Movie Awards and calls them “Insane” and “Hilarious.” You can read it by clicking the link below.

The writer lists seven examples he considers the wildest nominations of them all. The categories are … different. And that’s good. Maybe not insane and hilarious, though … Here’s one teaser for you. One of the nominations he mentions goes to J-Lo.

Moving on to a report over there that’s pretty awesome, a Charlie Brown movie is coming out in November, to coincide with the 50th anniversary of the classic “A Charlie Brown Christmas.” There’s a link to posters and a trailer over there.

Sick of movie awards shows, or are you ready for one more with the MTV twist? Do you want to see Charlie Brown and Snoopy together again on the big screen? When’s the last time you enjoyed “A Charlie Brown Christmas” through and through?

28 thoughts on “No matter the adjectives, it won’t be the Oscars”

Loving Life On and Off the Tracks

Are You Not Entertained?

A London blogger juggling a handful of creative passions. Join me here at Classy Chan for tips, tricks and a classically good read.